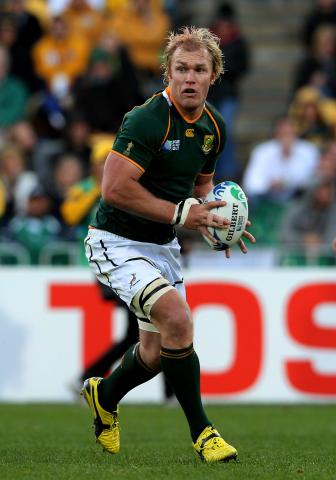 Renowned as one of world rugby’s finest back row forwards, Burger has captained South Africa during his stellar 12-year international career and is a former IRB World Player of the year. In an illustrious career he was won 86 caps for the Springboks and holds the record for the most tries (14) for a back row forward for his country.

The sight of Schalk Burger in the famous green Springbok jersey has been one that has dominated South African rugby for the majority of the 21st century. Since his debut for the Boks against Georgia in Sydney during the 2003 Rugby World Cup, the blond haired loose forward has gone on to win 86 caps for his country, has played in four Rugby World Cup’s, winning the tournament in 2007.

Burger made his Super Rugby debut for the Stormers in 2004 and his Currie Cup bow for Western Province the same year. His father, also called Schalk Burger, gained international honours for South Africa during their years of isolation in the 1980s.

Burger links up with Saracens after a spell with Japanese club Suntory Sungoliath and Super Rugby’s Stormers.