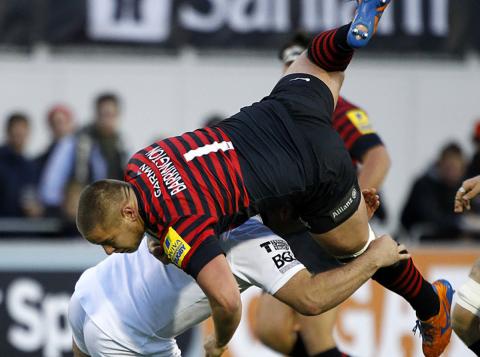 Richard Barrington arrived as a virtual unknown, leaving Championship basement dwellers Jersey in the summer of 2013 to link up with Saracens.

In that time, Barrington has carved out a reputation as a fine scrummager, and dependable prop forward with a bourgeoning potential in the game.

Having shared the loosehead duties with Mako Vunipola and Rhys Gill in previous seasons, Barrington will have more responsibility within the Double Champions’ squad with Gill’s move to Cardiff Blues over the summer.

A former Gloucester Academy player, Barrington started his career with Channel Island outfit Jersey RFC. A series of fine performance for the Championship side saw him catch the eye of the Saracens coaching staff and he has already pulled on a Sarries shirt having been part of the club’s squad for the LV=Cup clash against Worcester Warriors in 2012.

Since then, ‘Bazza’ as he is affectionately known within the Saracens camp, career has kicked on and has appeared in five finals for the Men in Black, collecting two Aviva Premiership medals and an LV=Cup and Champions Cup medal in the process.