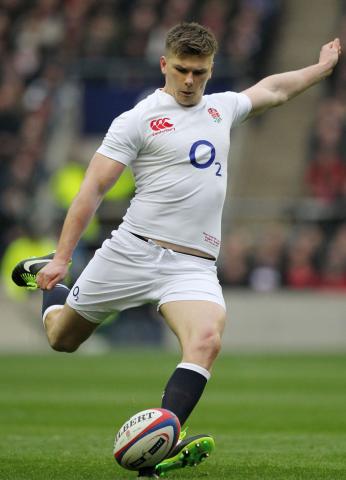 As the son of a rugby league great and former England centre Andy, there were always expectations that Owen would have a successful rugby playing career. However, few could have predicted just how successful it would be as he has gone on to be a crucial player for club and country with his game management and goal-kick prowess, as well as becoming a British and Irish Lion in 2013.

He first made his debut for Saracens in 2008 he was just 17 years old, which at the time made him the youngest ever player to appear in English professional rugby.

His real breakthrough at Saracens happened in the 2010/11 season when he was rushed back from a dual contract agreement with Bedford Blues as injury cover at fly half. He took his chance in the first team and never looked back, ending his debut season with a flawless kicking display over Leicester Tigers to inspire his side to their first ever Premiership title. His performances during the season saw him nominated for Young Player of the Season by both the Premiership and RPA.

A senior England call up became inevitable and in 2012 he was named the England squad for that year’s Six Nations. He started every game for England in that tournament with his versatility enabling him to cover both inside centre and fly half in the starting 15. Owen’s performances that year led to him being nominated, alongside Richie McCaw and Dan Carter, for 2012 IRB Player of the Year.

Since that time he has been virtually an ever-present in the England team amassing 43 caps and counting, whilst becoming England’s second top point scorer of all time at just the age of 24.

His continued excellence for both club and country has seen him win almost all major titles. Following the 2015/16 season where Owen was crucial in both England’s Six Nations Grand Slam victory, and Saracens’ Premiership and European triumphs, the only thing now missing from his illustrious collection is a World Cup. He has become one of the greats of world rugby and a key cog in Saracens’ current period of success.