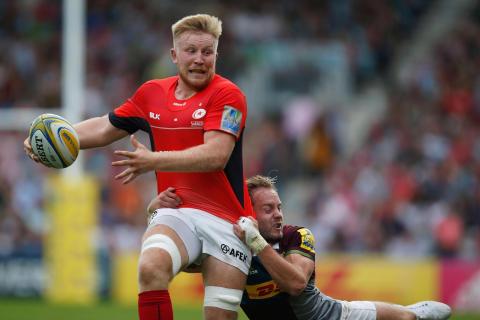 A key member of the Saracens squad, back row Jackson Wray is knocking on the door of Eddie Jones’ England set-up after a series of fine performances in Saracens pack of forwards.

A member of the Class of 2008 academy that includes Owen Farrell, Will Fraser, Jamie George and George Kruis, Wray’s development from promising youngster to top class Premiership player has been expedient.

A graduate of the Saracens Academy and Oaklands College programme, Wray burst on to the scene in the first half of the 2010/11 season with a man of the match performance in front of the TV cameras at Bath.

The same season, he was dual registered with Bedford Blues and he benefited from the club’s partnership with the championship club and gained valuable experience.

Since his time at Goldington Road Wray has become a vital member of Saracens squad, with the No.8 or blindeside flanker a fixture in Mark McCall’s side throughout the 2013/14 season.

Wray’s fine form in both the Aviva Premiership and in Europe saw the Essex-raised back-rower called up to Stuart Lancaster’s 55-man England training squad in the summer of 2014.