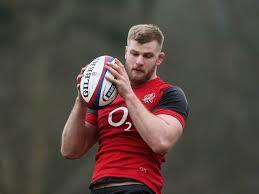 Alongside Maro Itoje, George forms one half of the second row partnership that dominated the 2015/16 season both domestically for Saracens and internationally for England. At the heart of the engine room for each, he is a sizeable contributor both with his line out expertise and all-round excellence.

Like his partner-in-crime, he came through the Saracens academy where he had a chance to learn from one of England and Saracens’ great second rowers in Steve Borthwick. George dovetailed with Borthwick towards the end of the latter’s career after forcing his way into first team reckoning in 2009. George’s excellence meant that the hole left by Borthwick’s retirement was filled in straight away.

After being a successful performer at age group level and the Saxons for England, he finally earned his first senior England cap in the 2014 QBE Internationals. He was also named in the England squad for the 2015 World Cup amongst a strong contingent locks. Since then he has gone on to cement his place in the starting tight five for England following his contribution in the 2016 Six Nations Grand Slam.